Staff member
Subscriber
Learning outcomes: Describe investment banking financing arrangements including private placement, public offering, best efforts, firm commitment, and Dutch auction approaches. Describe the potential conflicts of interest among commercial banking, securities services, and investment banking divisions of a bank, and recommend solutions to these conflict of interest problems. Describe the distinctions between the banking book and the trading book of a bank. Explain the originate-to-distribute banking model and discuss its benefits and drawbacks.

21.2.1. Dronedork is planning to go public with the help of their investment bank (IB). The company plans to sell 10.0 million shares and is exploring three options:
If the firm performs a Dutch auction, the six bidders (A to F) are shown below. Let us assume that the price determined by the Dutch auction is also a good estimate of the price that would clear under the other two approaches; i.e., please assume the same selling price achieved via the Dutch auction is also achieved under best efforts and firm commitment. 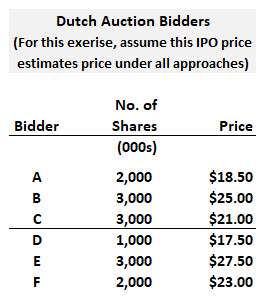 The net funds received by the company deduct the underwriter's cost from gross receipts. Under these assumptions, which approach raises the highest amount of net funds for the company?


21.2.2. In financial services, conflicts of interest are a thematic concern of regulators and violations, as GARP says, "are likely to be costly both in terms of fines as well as loss of reputation." Each of the following scenarios probably is a conflict of interest EXCEPT which is the LEAST LIKELY to be a conflict?

a. The bank holds a sales contest to encourage the promotion of a new retail product by its financial planners but instead of cash (to the planner who sells the most new product) the prize is an all-expenses-paid trip to an exotic location for the planner and his/her family
b. Advisors are trained to recommend the firm's own product for retirees but only because the firm's research department previously determined that the firm's own product does happen to be the best product in the marketplace
c. The brokers' compensation plan includes a 30% variable component but this annual bonus is based on customer satisfaction and the incentive plan is disclosed to customers
d. The investment bank prefers that its sell-side analyst initiate buy recommendations for stocks where the bank already has, or plans to seek, an underwriting relationship with the stock's company but only on the condition that the company meets the bank's minimum ESG criteria


21.2.3. The originate-to-distribute (OTD) banking model has both advantages and disadvantages. In regard to the OTD banking model, which of the following statements is TRUE?

a. OTD depresses the originating bank's reported return on equity (ROE)
b. OTD implies that investors should be aware of the adverse selection problem implied by information asymmetry
c. OTD has an inherent, unavoidable design bug and public relations problem: mezzanine and equity tranches absorb losses before senior tranches
d. OTD was banned after the global financial crisis (GFC 2007-08) such that it can no longer be conducted without incurring grave regulatory risk

P2.T9.907. The impact of fintech innovations on payment services and the changing landscape of investments (Gomber)